Safe participation in the movement is a joint responsibility of its creators, organizers and users. Road safety policy should also be implemented through sectors such as energy, environment, healthcare, science and education, new technologies, insurance, trade, etc. Shared responsibility requires concrete action by state institutions, regional and municipal authorities, non-governmental organizations, the private sector and civil society. Road safety is measured by indicators of road accidents and related causes and consequences. In the EU countries, the national statistical offices provide certain standardized information on road safety, which is mainly used to analyze the situation in the Bulgaria-Romania TGR.

Despite the standardization of information within Eurostat, there are national peculiarities that presuppose the way the analysis is performed. After collecting information and data on road safety in TGR Bulgaria-Romania, the following specific features were identified:

The main problems related to road safety and transport conditions in the cross-border area are worn out and irrelevant to modern conditions transport infrastructure, lack of highways, the presence of old and worn vehicles and last but not least non-compliance with traffic rules and unsatisfactory control in this regard.

In order to ensure road safety and improve transport conditions for all modes of transport, concerted action is needed on both sides: Romania and Bulgaria in several main areas:

A cross-border problem that has an additional negative impact on traffic safety and transport conditions is the fact that the existing transport network in the cross-border region Bulgaria-Romania does not provide good connectivity between the two countries and easy access of the border areas to the two TEN-T the corridor connecting Central and Northern Europe with the southeastern part of the continent and the Middle East.

The connection of the regional transport infrastructure with the main national corridors is also insufficient. This leads to congestion and rapid wear of the existing connecting infrastructure and increases the risk of accidents and other transport accidents.

To improve connectivity and increase the level of transport safety in the region requires joint efforts of the two countries in the following priority areas:

To ensure road safety and optimize transport conditions in the cross-border region, coordinated and coordinated actions by Romania and Bulgaria are needed to formulate and implement policies in the transport sector at national, regional and local levels. Such targeted joint efforts will reduce the number of accidents, build and develop modern transport infrastructure and increase the attractiveness of the region.

Lost lives on European roads due to road accidents are still one of the most dangerous and costly phenomena for people in the EU, even in 2020. Since the first EU target to reduce road deaths has been introduced in 2001, the three baltic states achieved the highest reductions. Latvia reduced the number of road deaths by 76% and Lithuania and Estonia by 74% (Fig. 1). They are followed by Spain and Luxembourg with a 69% discount and Ireland with a 66% discount. However, progress has been slow in Romania with a 24% decrease, Bulgaria with a 38% decrease and the Netherlands with a 39% decrease:

Since the EU’s first target for reducing road deaths was introduced in 2001, the three Baltic states have achieved the largest reductions. Latvia reduced the number of road deaths by 76% and Lithuania and Estonia by 74%. They are followed by Spain and Luxembourg with a 69% discount and Ireland with a 66% discount. However, progress has been slow in Romania with a 24% decrease, Bulgaria with a 38% decrease and the Netherlands with a 39% decrease. 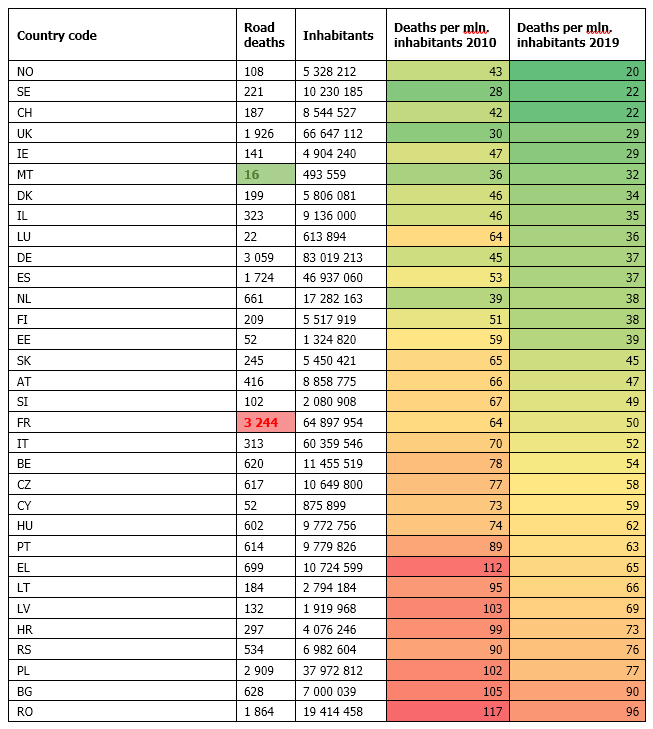 Romania, on the last place in the EU for road safety

For any suggestions about the information portal you can call us or write.

Contact us:
Contact us:
Some of the fields are not filled
Sending your message ...
Your message has been sent!
Wrong code!
Failed to send, try again!
Powered by Bitmap Bulgaria Ltd.